Africa’s most popular mobile browser, Opera is about to radically change the payments landscape in Africa.

I think before this blog and thread, the global cryptocurrency community will not appreciate the strategic relevance of Bitmain’s $50 million investment round into one of Africa’s most popular Chinese owned mobile browser, Opera. What they will not see is the Fintech connection at play in East Africa, where the wildly successful mobile browser is creeping into digital financial services like mobile payments. For the payment professionals of East Africa, the pertinence of this investment on the future of their industry will not dawn on them perhaps until it is too late.

Last week’s SEC’s disclosure on Opera’s newest investor for their $115 million IPO, was the best strategic news on cryptocurrency ‘adoption’ in Africa I have seen in the last 5 years with far reaching implications on e-commerce, trade and payments for the region than appears at first glance.

My choice of a header image above accurately captures increasing Chinese influence on Kenya and Africa, at both state and commercial level.

This blog is based on my collected thoughts on a twitter thread breaking down why I think Chinese phone manufacturers, a Chinese Bitcoin mining pool and hardware chip manufacturing company and a popular Chinese owned mobile browser running on more than 100 million mobile phones in Africa, will shake up the African payments landscape. Having just introduced the first browser with built-in Crypto wallet on on its popular data saving browser, in addition to its Opay browser wallet recently launched in Kenya, Opera and Bitmain are plotting a cryptocurrency gateway for linking regional payment options with China, the web and the rest of the world.

Whether you are in Nigeria or Kenya, online payments into and out of Africa are suck, especially outflows. The experience is nowhere near the ease we are accustomed to with local p2p mobile remittance like Mpesa, remote bill payments and offline merchant payments. I will give credit where it is due; the Kenyan fintech industry has succeeded at everything local – mobile lending, mobile payments, mobile remittances, remote bill payments and even though it still needs some more work, offline merchant payments.

It is when you have to cross the border, like from one country to another or from offline Africa to online, that the payment experience turns to utter shite.

Take for example the Visa or Mastercard branded cards issued by Kenyan banks. Sure, they may work alright from time to time, but behind closed doors, bankers will admit cards are plagued by massive online fraud [ I&M Bank suspends online card payments.] Asking people to type in their card details on every merchant’s website is not exactly bank grade security.

Even mobile money payments, by far superior to declining cards, are not natively designed for the web. They still run as simple commands on low level SIM application toolkit on GSM SIM cards. To link it to online gateways requires a messy patchwork of third party integrations to just barely get it up and running .

Mpesa’s most recent partnership with Paypal and Transferto to pay and receive electronic US dollars is an example of the clunky experience that users have to put up with. It takes close to an hour to get through 3 intermediaries – Mpesa, Transferto and PayPal before a US dollar balance reflects on your PayPal account. After this daunting process, you still have to login to your PayPal account separately to effect the payment. One Kenyan blogger said it is a shame that we have to do things, old school.

Equity Bank’s PayPal integration is worse. Received electronic US dollar funds first have to route via a South African bank, before you can eventually access your Kenya shilling 3 days later!

I dare you to find one payment professional in East Africa that will disagree online payments in Africa are broken.

Kenyan Fintech conferences are packed full with 3rd party card and mobile payment integrators scrounging for business. I have found that less than 5% of payment professionals think deeply about the fundamental reason for the dire state of online payments – the lack of a native web payment infrastructure. Instead, we have settled for non-ideal proprietary alternatives like Paypal and Visa as workarounds on top of the web. These workarounds are at the core dependent on the US dollar, US dollar infrastructure and US companies as third party payment processors. Ask yourself why we cannot pay 5 bob online, yet we can send a 20MB video on whatsapp in 2018?

In my opinion, cryptocurrency technology is here to save Africa’s emerging economies from the shackles of the old web. As a neutral, native web payments infrastructure, cryptocurrencies offer us an opportunity to redesign online value exchange in a way that aligns with our context.

Kipochi was the first payment startup in East Africa to realize this, and set up an integrated bitcoin wallet in 2013

“Global bitcoin wallet service Kipochi has launched a product that allows people in Africa to send and receive bitcoins, plus convert them to and from the Kenyan currency M-Pesa.” – Coindesk

But the time was not right. Pelle Braendgaard recounts the painful story [ What Happened at Kipochi ] of how, on order by Safaricom, they got shut down by Kopo Kopo (a third party integrator) within 2 weeks of integrating with Mpesa.

A year later, another startup Bitpesa, launched a bitcoin remittance online service integrated with Mpesa. Unlike Kipochi, they managed to get operations off the ground for close to 2 years, until they too, on order by Safaricom, got shut out of Mpesa integration by Lipisha Ltd. (a third party integrator) in December of 2015. 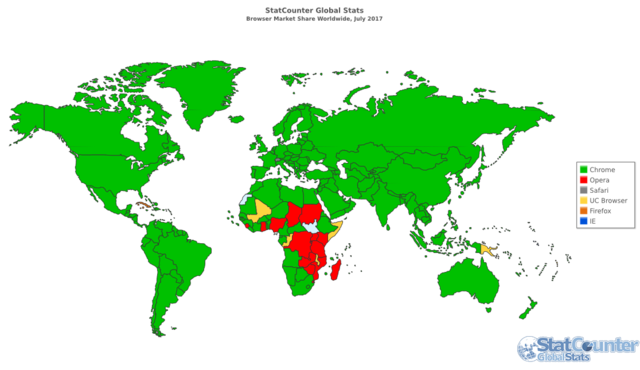 The chart above shows the market share of Opera in Africa in red.

I believe Opera is the next company to have a go at it, through its Kenyan subsidiary Opay. Unlike Kipochi and Bitpesa, they have the vision, muscle, customer base, strategic investment and most importantly web infrastructure to change the payments landscape through their Opera mini browser integrated wallet for the millions of Africans who use their app everyday.

The first step was to launch an office in the region backed by a $100 million budget for its pan-African strategy. Opera set up Opay, a subsidiary office in Kenya, and hired a man with a long track record of innovating in the Fintech space – Eddie Ndichu – a Fintech strategist from one of the largest banks in East Africa, KCB.

Over the next 12 months, they released Opay a browser integrated wallet product that lets users apply for instant loans, pay utility bills, purchase airtime, receive cash back and incentive rewards and crucially, connect to local payment options such as card, Airtel and Mpesa.

The last piece of the puzzle was yesterday’s news of Opera launching an integrated crypto wallet that supports multiple cryptocurrencies and allows users to top up, hold and make online payments seamlessly using cryptocurrencies such as Ethereum or bitcoin cash.

It is worth noting that Chinese phone manufacturers have had success shipping phones into Africa – all types of phones from feature phones to the high end smartphones. Tecno, Itel, Infinix, and Huawei are all popular Chinese brands. Some of them have deals with Opera to pre-install Opera browsers as the default browser.

Back in China, Opera’s latest investor Bitmain, also runs Antpool, the largest cryptocurrency mining operations in the world. Besides being a wildly successful Chinese hardware designer and manufacturer of cryptocurrency mining equipment they have invested significant resources into the success of bitcoin and bitcoin cash. Lately, they’ve embarked on a global expansion strategy investing in exchanges and payment companies.

Bitmain is an investor in Yours.org since January, one of the few successful companies in the crypto industry with a real working product. Described as “the first consumer app to integrate a non-custodial Bitcoin wallet with a social content app.” After perfecting a bitcoin cash powered micropayment social media concept, Yours is now pivoting to Money Button, the same concept but as a B2B API accessible for proprietary websites.

Yours CEO Ryan Charles described “Money Button as similar to pressing Like on Facebook.” On this video [ A Conversation With Ryan X Charles ], Charles talks about the potential of their pivot to transform web payments. Charles is absolutely talking about web companies like Opera.

It is fascinating to watch the growing number of East African internet users riding on the back Chinese manufactured phones pre-installed with Opera Mini as a default browser. We now have a bulging demographic of young East Africans, connected to the internet and engaging in trade, biashara and commercial relations with China more than ever before. Seems pretty obvious cross border payments and online payments are a crucial piece of this picture.

Ecommerce companies like Alibaba have their eyes set on Africa too, but it is a headache: the payments infrastructure is fragmented, there are over 50 countries to deal with, all with their own national currencies, central banks and regulatory frameworks.

We can see the early attempts to bridge payments on this corridor, like Equity Bank’s partnership with Red Dot Payment Limited to enable Kenyan businesses to accept Alipay and WeChat payments.

“The long-term plan, according to Equitel, is to allow Kenyans to be able to hold Alipay and WeChat Pay accounts through them and thus facilitate international payments.” – techweez

My hunch is, Opera is playing this space too.

Link to my twitter thread with more details here and here

12 thoughts on “How The Chinese, Africa’s Most Popular Browser , And A Bitcoin Mining Company Are About To Change African Payments”